You are here: Home › In the News › St. Benedict’s Prep in Newark announces ambitious fundraising goal of $100M 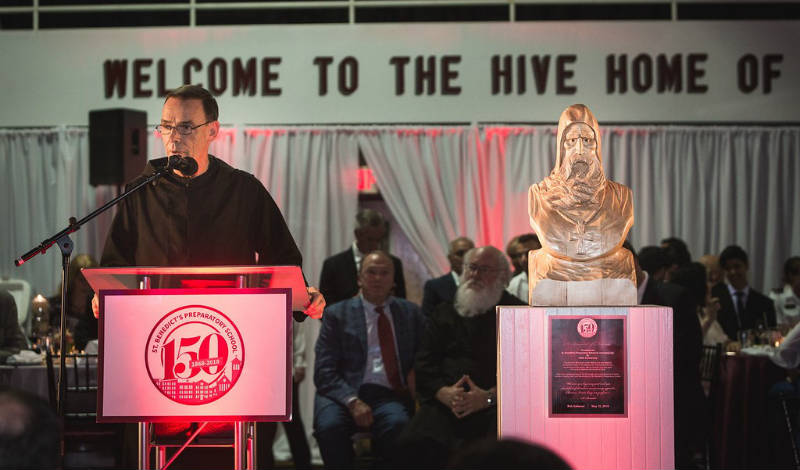 If you’re looking for another metric that shows just how important St. Benedict’s Prep is to Newark — and how many individuals and corporate sponsors are determined to keep it that way — consider this: Moments after the school publicly announced its ambitious fundraising goal of $100 million, Father Edwin Leahy told the crowd it already has raised more than $60 million.

Father Ed, the school’s headmaster, announced the fundraising campaign during the scholarship gala that celebrated the 150th anniversary of the school — one at which three benefactors were given the school’s highest honor, The Medal of St. Benedict’s.

“It’s great that we have you all here to celebrate with us our 150th year,” Father Ed said. “We are looking forward to the next 150 years. We trust that those coming behind us will continue in the tradition that began in 1868.

“This is a large team that is required to help these kids grow up in difficult environs. We continue to rely on you and thank you. Pray for us.”

The campaign is called: Forever Benedict’s: The Campaign for St. Benedict’s Preparatory School.

“We have been working hard, but quietly, over the last few years, speaking to our closest alumni and friends,” Leahy said. “But, now, we are ready to publicly announce the largest campaign in our history.

“With Forever Benedict’s, we will raise $100 million, with $50 million dedicated to our Annual Fund to ensure our daily operations continue. The other $50 million will be earmarked to grow our endowment. And, thanks to those who have already participated, I am pleased to report that we have surpassed more than $60 million in gifts and pledges from donors throughout the country.”

Click here to learn how you or your company can contribute.

St. Benedict’s Chief Advancement Officer Michael Fazio said he has been energized by the campaign’s progress to date.

“When you think about it, how does a private K-12 school in Newark serving students — most of whom struggle to pay the cost of attendance — raise $60 million?” he said. “Well, the St. Benedict’s community always comes through.

“We could not be more blessed with a strong cadre of alumni and friends who believe in this mission. I have no doubt we will reach our $100 million target. It won’t be easy. And we need everyone to participate. But we’re going to do it. That’s just how St. Benedict’s works.”

For those who do not know, St. Benedict’s is a K-12 school devoted to students in and around Newark, and has earned a national reputation for its student leadership program and student-run accountability system.

St. Benedict’s leaders say their innovative approach to helping students discover and develop their voice has led to the creation of the Vox Institute. Vox (Latin, for voice) is a multifaceted program in which St. Benedict’s experiences and practices are shared with schools and cities around the country. Ninety-eight percent of students attend college, and 87 percent have either graduated or are on track to do so.

At the event, the school also bestowed The Medal of St. Benedict’s on three recipients: Dean Ivan Lamourt, along with staunch supporters Prudential Financial and Steven M. Grossman.

Lamourt, St. Benedict’s dean of counseling services, graduated from St. Benedict’s in 1982. He returned in 1990. Among his contributions since has been spearheading the development of the St. Benedict’s Counseling Center, a comprehensive mental health services department that is at the forefront of applied school psychology and is a resource virtually nonexistent in other urban school settings.

“I’ve been privileged to work with the young men of St. Benedict’s who display courage every day when they live in a world that tells them they don’t matter,” he said. “These young men have the courage to face a world that is uncertain and, many times, unjust. These young men show courage in the face of extreme adversity and face that challenge by showing incredible love and compassion towards each other and the world.”

St. Benedict’s Counseling Center wouldn’t be possible without support from groups such as the Grossman Family Foundation.

Father Ed also announced during the gala that the counseling center would now be named in honor of Steven Grossman, whose family foundation has endowed a fund that supports the center, along with the Backpacking Project, College Guidance, Leahy House and need-based financial aid for students.

Prudential Financial was the first corporate donor when the school reopened in 1973.

“This is a tremendous honor for us, made particularly meaningful by the fact that we have an incredibly longstanding partnership with St. Benedict’s Prep,” Lata Reddy, senior vice president of diversity, inclusion and impact at Prudential Financial and chair and president of The Prudential Foundation, said. “We couldn’t be prouder of the partnership that we have with St. Benedict’s and look forward to the next 150 years.”