You are here: Home › In the News › Cento Amici Member Bob Hurley in the New York Times 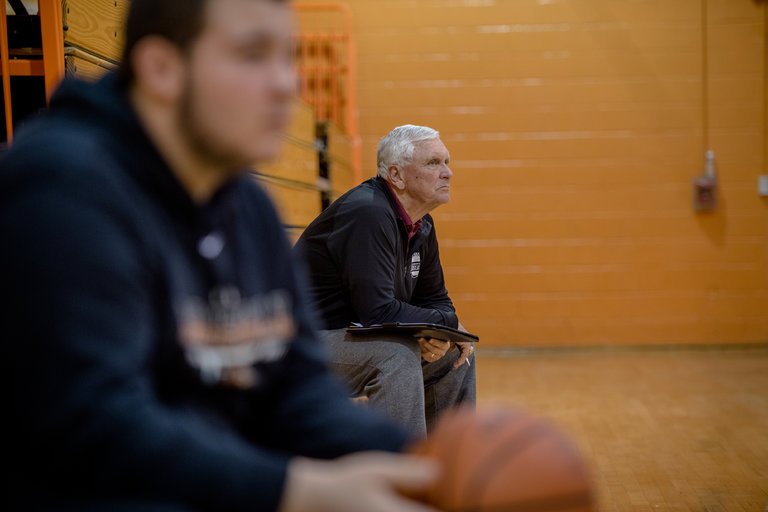 The School Closed. The Players Left. But the Coach Can’t Quit.

It was 3:50 p.m. on a Thursday afternoon when the gray-haired coach parked his silver Toyota Camry and strode purposefully toward the gym.

Bob Hurley, 70, wasn’t heading into his gym and he wasn’t getting set to coach his players — he no longer has either — but he needed a basketball fix just the same.

So wearing gray sweatpants, gray sneakers and a blue pullover, and armed with the black notepad he takes with him nearly every time he sets foot in a gym, Hurley entered Linden High School and took a seat in the first row of bleachers.

Since the closure of St. Anthony High School in Jersey City last spring, Hurley, a member of the Basketball Hall of Fame who has won more than two dozen state titles, has become a coach without a team. He has found homes for the old trophies and scrapbooks, and even for his former players at new schools, but it will take more than a few months for him to adjust to basketball as a consumer experience, not an occupation, for the first time since 1972.

“This is weird,” Hurley told Linden’s coach, Phil Colicchio, when the latter came over to exchange pleasantries before the November practice. “Usually I’d be doing this stuff. But I’m stealing from you and I don’t know what I’m going to do with it.”

Of course, Hurley could have just found another team. When the news broke that St. Anthony was closing, he fielded calls from a high school in California and another in New Jersey asking if he would be interested in coaching this winter. Walking away from basketball was never an option, but leaving Jersey City, or taking over another team after decades at St. Anthony, just didn’t feel right, either. So Hurley has become a spectator instead.

By the time he settled into his seat at Linden High School, Hurley had already attended nine college games in four states this season. He had watched his son, Bobby, coach Arizona State on television and had seen his younger son, Dan, lead Rhode Island in person at least four times. He had attended more than half a dozen college practices and spoken at nearly as many clinics.

“It’s sad,” Dan Hurley said. “It’s the first time in 50 years where he’s not leading a group of young men.”

The transition has been easier for Hurley, in some ways, because his legacy lives on through the St. Anthony diaspora. Nearly 20 former St. Anthony players are on college rosters this season, and several dozen more have scattered to other New Jersey high schools through what Hurley jokingly refers to as the “dispersal draft.” Then there are the coaches and the assistant coaches, the old rivals and the old friends.

“I coach basketball,” Colicchio said. “He loves basketball. It’s two different things. And not too many people love basketball the way that he does.”

Hurley, who won nearly 1,200 games and 28 state championships at St. Anthony, drove the 15 miles to Linden not only to see Colicchio, but also to watch the progress of a former St. Anthony junior varsity player. Point guard Myles Ruth is expected to start for the Linden varsity this winter.

As much as Hurley tries, sometimes it is hard for him to keep a low profile. Before the Linden workout began, all 16 players, including Ruth, made their way to Hurley, forming a line to shake his hand. Once they began playing, Hurley lost himself in the action, occasionally scribbling in his notebook.

Hurley does seem to be enjoying himself in his retirement. He takes two of his grandchildren to school every day. He is fascinated by the television shows “Mountain Men” and “Homestead Rescue,” and he and his wife, Chris, are regulars at their favorite Jersey City restaurant.

He is still coaching, too. After St. Anthony closed, Hurley set up a nonprofit organization, the Hurley Family Foundation, and through that program he spends a few hours a week working with elementary school and high school players. But he still seeks out more basketball.

One day in October, he attended a practice at Fairleigh Dickinson in Teaneck, N.J., to check in on another former St. Anthony player, Kaleb Bishop, who is a sophomore forward for the Knights.

“The first thing he did when he walked in was he sat down and started taking notes,” said F.D.U. Coach Greg Herenda, who has known Hurley since attending his summer basketball camp in 1977. “I came full circle in my life in that I was conducting a practice and Coach Hurley was taking notes.”

Hurley has made a career habit of taking those notes, recording them in a black notebook that says, “Bob Hurley — St. Anthony Friars,” on the cover. He has years of these observations stored in plastic folders in his closet.

“There isn’t only one way to play,” he said, “so that’s why I think when you go from one place to another, you always should have pen and paper. You pick up something: It might be a phrase. You pick up a drill. There’s always something.”

In November, Hurley’s journey took him to the New Jersey Institute of Technology, where he watched two of his former players help defeat another who is now an assistant coach at Wagner, where Dan Hurley coached for two seasons. On the weekend before Thanksgiving, Bob and Chris took in three games in a tournament at Mohegan Sun Arena in Connecticut — two on a Saturday and one on a Sunday. (That is the maximum number of games, Hurley joked, that Chris will allow in one weekend.)

And at 6 p.m. on Thanksgiving, when most people were home with their families, Bob and Chris and their grandchildren Anna and Gabe headed to Brooklyn to see Dan coach Rhode Island against Seton Hall in a tournament at Barclays Center. The next night, around the same time Bobby was coaching Arizona State past No. 15 Xavier in Las Vegas, the elder Bob Hurley was back at Barclays Center, seven rows up, for Rhode Island-Virginia.

“I think it’s probably the hardest time of the year for my father and mother and former students,” Dan Hurley said. “I don’t want to just make it strictly a basketball thing. It was a community of young people that are suffering that a school that they loved and were nurtured and developed in is no longer there.”

Bob Hurley knows where he will be on Friday, when the New Jersey high school regular-season begins: at the Dickinson-Ferris game in Jersey City. On Dec. 30, he and Chris will head back to Rhode Island to watch Dan and Rhode Island face George Mason. The next day, he’ll continue on to Merrimack College in Massachusetts; three of his former pupils — Juvaris Hayes, Idris Joyner and Jaleel Lord — play for the Warriors.